Part 1: “From there will appear the horn of Satan”

So you thought the global Jihad was run by whom exactly? Cave-dwelling mullahs in the Stans? Death-cult guys in Iraq and Syria dressed like ninjas? Saudi oil sheikhs who want all men to grow beards, wear tablecloths on their heads, and stone women? Pakistanis with a grudge against the whole world and nukes that make them feel invincible? The Turkish dictator who wants to wipe out the Kurds? Sure, all of the above, but that’s not even half the picture.

Most of those guys up there are what you might call field operators, except for the dumb shmuck butchering Mumbai commuters, who is just a footsoldier, and Baghdadi, who got promoted to middle management since his Baathist bosses stopped working for Saudi and took full ownership of ISIS.

So if the visible face of the global jihad is just the small and medium fry, who are the big cheeses? State sponsors? Evil corporations? Secret cabals?

A sentence repeated to death in the US but that remains anathema in the corridors of actual power is “15 of the 19 hijackers were Saudis.” From the FBI investigations of the USS Cole bombing in Aden harbor to 9/11 and to the Sinjar documents detailing the vast flood of Saudi fighters and cash flowing to ISIS’s precursor, the Islamic State of Iraq, Saudi Arabia is both the perennial elephant in the room and the third rail, even more lethal than the Israel lobby.

A random example: Last September, the 13-year-old case of the families of 9/11 victims against Saudi Arabia was once again thrown out by a US judge, who preferred to give those known terrorist financiers the benefit of “sovereign immunity” that was denied to Afghanistan, which unlike Saudi had nothing to do with 9/11.

It was maybe for the best that the attorney who launched the litigation, the famous “tobacco lawyer” Ronald L. Motley, drank himself to a slightly early grave before he could see the wreck into which Saudis, with the help of US and British courts, turned his lawsuit. His chief investigator Jean-Charles Brisard, Europe’s top authority on Saudi terrorist financing, was the author of the report on Al Qaeda financing presented by French president Jacques Chirac to George Bush when he visited New York and Washington one week after 9/11. Two years later, Brisard used the report that painted a very ugly picture of Bush’s Saudi friends as the basis for 50 pages of Bin Laden: The Forbidden Truth that he co-authored with Journalist Guillaume Dasquié. 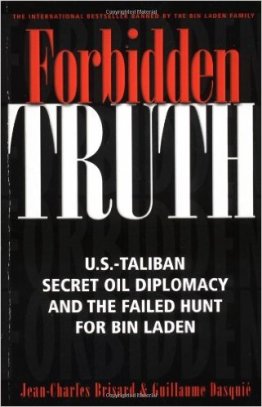 80% of the suppressed book was about Saudi terrorism but the US pretended it was about the Taliban and oil.

In Brisard’s book there is also a voice from beyond the grave, like Caesar’s ghost: That of former FBI counter-terrorism chief John O’Neill who pursued the Saudi-Al Qaeda nexus relentlessly but vainly until he was forced out of the FBI and suckered into what he thought would be an easy gig: head of security of the WTC. He died there on his second day on the job. Years of frustration from Saudi stonewalling and the US government tying his hands led him to tell Brisard this: “All the answers, everything needed to dismantle Osama bin Laden’s organization can be found in Saudi Arabia.”

What happened next to Brisard and his book is what happens to anyone who steps on the toes of powerful criminals these days: a British libel court. The UK’s intentionally archaic libel laws protect everyone from islamofascist mass murderers to gangsters from public scrutiny. They also ended up protecting Al Qaeda’s Saudi financiers, when Saudi billionaire Khalid bin Mahfouz, whose dad founded the notorious money-laundering and terror-financing BCCI bank in which he had a 20% share, took Brisard and co-author Dasquié to court.

The neat thing about corrupt totalitarian cesspits like Saudi Arabia is that the powerful can make inconvenient evidence and people disappear without a trace, since there are no independent institutions to keep reliable records. Mahfouz did just that, disappearing among other things his sister’s marriage to Osama bin Laden, his homie from Yemen. So Brisard and Dasquié were made into liars and were forced to publicly retract the entire chapter on Mahfouz entitled “A Fortune in the Service of Terrorism,” which of course killed the book and almost killed their careers as well. With Brisard’s credibility shot and the chief attorney dead, the 9/11 families’ lawsuit was doomed.

Saudis are so good at this impunity game that they have been able to bomb Yemen to rubble and kill tens of thousands of civilians there using all sorts of strictly banned weaponry for over a year without any reputable media organ or institution daring to utter a peep. In fact the unimaginable horror of what they are doing in Yemen makes all their previous capers, whether it’s blowing up the WTC or drowning Syria in blood, look like child’s play.

The prophet of Islam once famously said that the horn of Satan would appear in the Najd, from where the Saud tribe did indeed emerge 1100 years later leaving a bloody trail of massacres behind it until it finally captured the holy cities. So is Saudi the ultimate evil, the source of all Islamist terrorism? The answer is unequivocally no. Saudis are too lazy, backward, ignorant, barbaric, and incompetent to have become such a huge menace on their own, for one thing. The people whom we see today abandoning their tanks and fortresses to flee from half-starved barefoot Houthis are barely capable of fighting their way out of a paper bag, much less mount a global jihad. They certainly are evil enough to do what they do but simply lack the mental and physical capacity to carry through with their evil intent.

So who helps them and why? That’s when we see how East meets West.