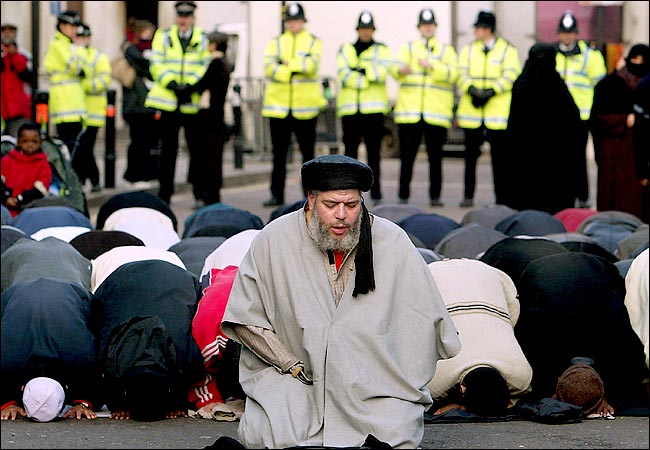 January 2003: London Bobbies making sure that Abu Hamza al Masri can continue to recruit terrorists on the street after he was kicked out of Finsbury Park mosque because of his extremism and illicit activities

White Brits imagine that “Londonistan” designates the racial and ethnic diversity of multicultural Britain that they hate. In fact the term was coined by French intelligence as a derogatory reference to the sanctuary offered by Britain to jihadist terrorists from all over the world.

The free hand given to jihadists by the “New Labour” governments of Tony Blair and Gordon Brown is well known, “Captain Hook” in the photo being one of the more outrageous specimens of New Labour’s Londonistan. So has anything changed under the Tories? Is Britain Londonistan no more?

Londonistan is alive and well

Not for a minute. Remember John Cantlie? He’s one of those ambiguous chaps cruising the vast grey war zones of the world where spooks and journos mingle. He and Dutch photographer Jeroen Oerlemans entered Syria through the Bab al Hawa border post with Turkey on the exact day that Tawhid Wal Jihad founder Abu Musab Al Zarqawi’s former accomplice and Afghan Jihad buddy Firas Al Absi’s gang of foreign jihadis seized it from the Syrian regime and hoisted the first-ever ISIS flag in Syria there.

The terrorists then captured the two “reporters” and held them prisoner, something the latter apparently didn’t anticipate. The two subsequently got shot trying to escape, were rescued a week later by the Western-backed Farouq Brigades (the infamous cannibal jihadis), who then killed Firas Al Absi. In the meantime, though, the hostages noticed that the men who kidnapped and shot them were mostly British, speaking with South London accents. The medic of the group who first clubbed Cantlie with the butt of his AK-47 and then treated his wound turned out to be an NHS doctor, who was later identified as Shajul Islam and brought to court but walked because, so we’re told, Cantlie refused to testify. He was returning to Syria and didn’t want to make any more enemies there by helping jail the terrorists who nearly killed him.

In retrospect, that may have been a wise decision in view of his subsequent capture by ISIS and the fate of his fellow inmate and colleague James Foley at the hands of East Londoner Mohammed Emwazi aka Jihadi John.

So where did this new generation of British jihadis come from? Abu Hamza and his Muhajiroun mates, who had been serving the crown ever since the Afghan jihad (where “Captain Hook” lost his hands and an eye learning to make nitroglycerine at Al Qaeda’s Darunta training camp in Jalalabad) were now either in jail or in exile. Who took their place? The obvious answer is Anjem Choudari, who is Muhajiroun veteran Omar Bakri’s disciple. In fact Cantlie’s first set of terrorist captors were sent there jointly by Choudari in the UK and Bakri from his Lebanese exile. Fouad Belkacem in Belgium, whose outfit Sharia4Belgium Choudari backed financially, was the European end of the operation, Belgian counterterrorism being much more underfunded and disorganised than it British counterpart and therefore allowing greater freedom of action to the terrorists.

Jihadi John, however, was a different creature altogether. He came from a hitherto unpublicised group who called themselves North London Boys, with links to Al Shabab in Somalia, and whose imam’s name was censored in the court documents. The “Boys” appear to have been thoroughly infiltrated as Emwazi had Mi5 breathing down his neck at every move and both he & other members were targeted by drone strikes in the end. So the whole thing looks like a “set em up ‘n knock ’em down” bowling-alley operation with an unnamed provocateur doing the setting up and Predator drones the knocking down.

Except-and this is where the plot thickens-the London Boys’ imam is anything but unnamed. He is Hani al Sibai, the guy behind the Tunisian jihadist who gunned down 30 Brits on a Sousse beach. The reason his name was blacked out is because the UK government has bent over backwards to protect him for years, even going so far as to campaign unsuccessfully to remove him from the UN Al Qaeda sanctions list. Sibai is, with Choudari, currently Londonistan’s most active terrorist ringleader.

All of the terrorist chiefs mentioned here have been appoached by the intelligence services and most likely recruited. Abu Qatada, Al Qaeda’s top banana in Europe, was famously put up in an Mi5 safehouse not far from Scotland Yard when the Metropolitan Police were looking to arrest him. Omar Bakri readily recounted the details of the deal he had made with Mi5 and Abu Hamza often indicated resentfuly that he was abiding by the deal he’d made but that the authorities weren’t. Yet, all these Mi5 assets continued to kill people in the Western countries they were supposedly recruited to protect.

British authorities argued for decades that they couldn’t prosecute these terrorists because their hands were tied by the realm’s purportedly exemplary libertarian laws, even as they were locking up people with secret evidence and carting them off to secret torture prisons, pretexting the very terror wrought by their Mi5 jihadis to tear down whatever civil  liberties still existed. Not a single country outside the UK has ever believed this mendacious argument, particularly as two of Mi5’s informants in possession of particularly damaging information about the terrorists cultivated by HM’s secret services were locked up in Guantanamo Bay. One of them, Reda Hassaine, was the Mi5 asset who set up the London safehouse for Al Qaeda kingpin Abu Qatada. 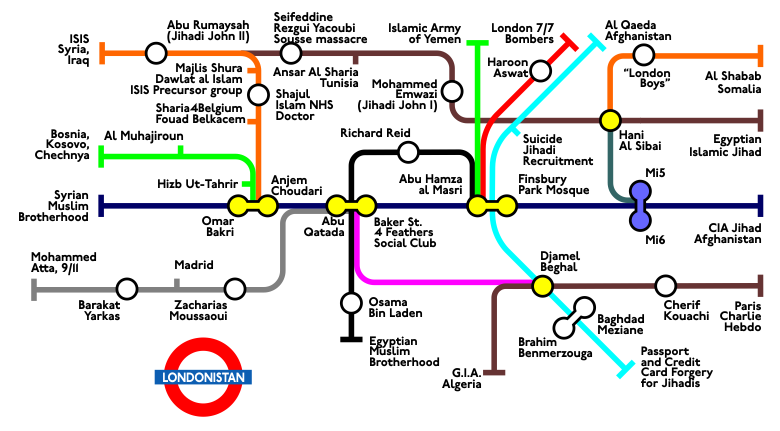 Just one of the London landmarks owned by Qatar

So why does the UK, supposedly an advanced Western democracy, still cultivate these jihadist terrorists much in the same way as Pakistan or Turkey? The most obvious explanation is its foreign policy, which has always sided with the fundamentalist Gulf oil sheikdoms against secular Arab states, as these tend to oppose British multinationals’ attempts to plunder their resources and markets. However when, in these final stages of Britain’s postimperial decline, British royals humiliate themselves in front of primitive Bedouin oil sheikhs to convince them to invest in the UK and London’s most famous landmarks are owned by Qatar, Britain’s jihadism appears much less an instrument of Perfidious Albion’s traditional divide-and-conquer than an aspect of its servitude to its rich Salafist patrons of the Gulf. So when Britons are mown down by Salafist gunmen on holiday beaches or blown to bits while commuting to work, they can take comfort in the fact that the deaths of kuffars like themselves serve to keep rich oil sheiks’ money coming into the country.

The humiliation of British royals is only part of the price that the UK must pay to keep the Gulf money coming in.

Part 5: The end of the American jihad – sort of
Part 4: The Long War
Part 2: Allons enfants du djihad
Part 1: “From there will appear the horn of Satan”